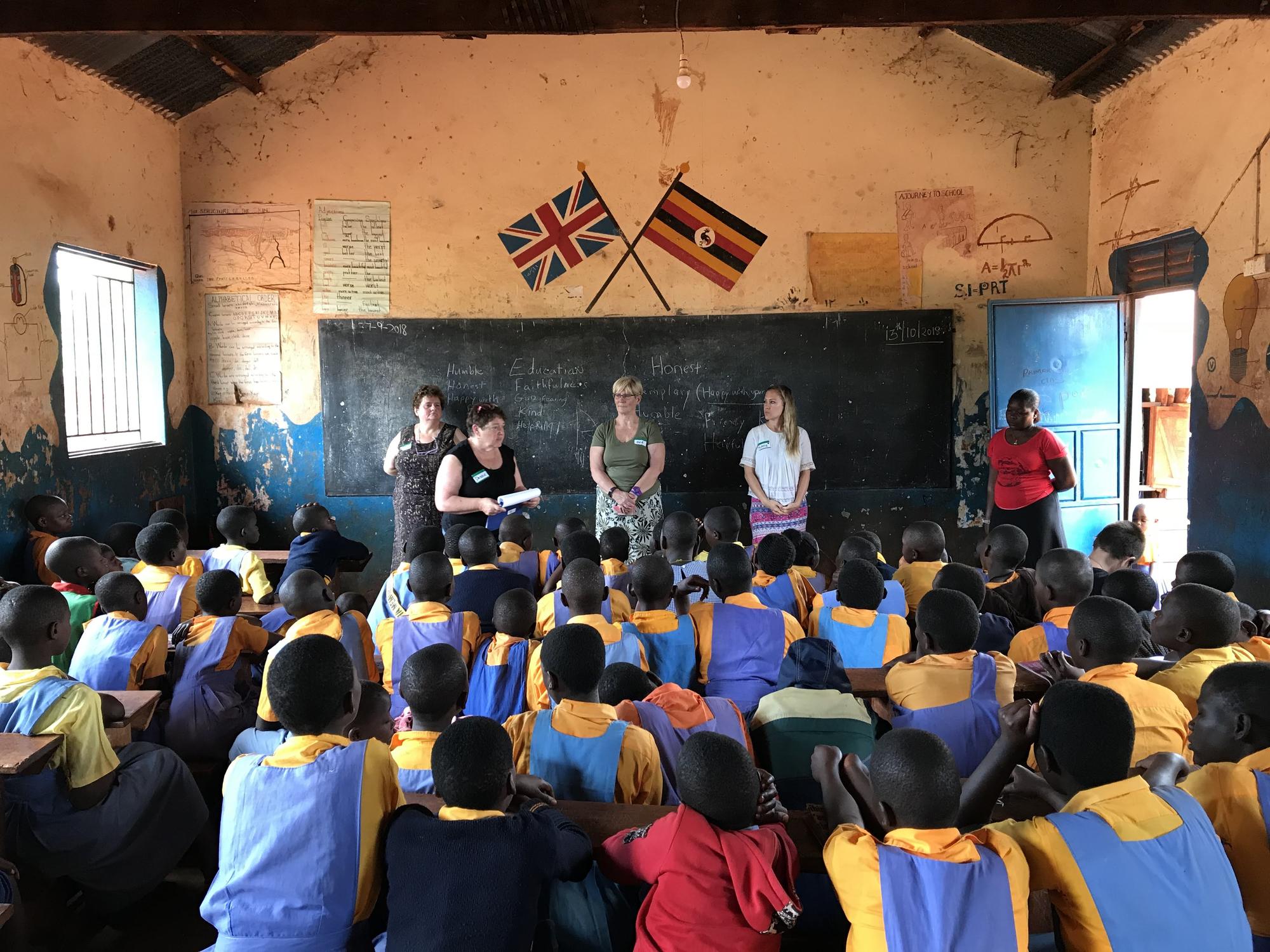 As we look back over the past 15 years, how do we know if it’s worth the investment of the next 15 years?

Not that long ago, I had an epiphany about something that, well, isn’t actually so profound. I had this idea that after Jesus performed miracles in people’s lives, their lives became perfect. But, think about it: everyone that Jesus healed likely got sick again. Everyone that Jesus fed was hungry a few hours later. Everyone that Jesus raised from the dead definitely died again. So, what was the point of all of those miracles, compassion, and meeting people’s physical needs?

For the past 15 years, Hungry For Life has been facilitating all kinds of activity. We've fed and medically treated tens of thousands of people, many of whom are likely hungry or sick again today. We’ve built schools, homes, hospitals and water wells, some which are still in good shape and others which aren’t. It’s not all about the soccer balls, shoes, clothing, school supplies or medication that has been given away. It’s not even about the thousands of volunteers that have traveled on short-term teams over the years. Why?

What is the point of all of the activity these past 15 years, since the physical results are so temporary? All of this is just a means to an end. So, why are we doing all of this?

Our vision — the “end” that we work towards — is a world transformed by a global movement of compassion and justice, evidenced by the eradication of needless suffering. Transformation. Complete renovation. Wholesale change in this world, brought about by Christians who simply act like Jesus. And how do we know? We’ll know when needless suffering has been eradicated.

Here is how: simply by telling stories. Stories are the bottom line of what we do; the return on investment. Stories are the currency of any organization or church that wants to see something change; to see people change. The Bible is full of stories, not statistics. We know if the Kingdom of God has come by reading about what has happened in the lives of people. Broken situations and broken people being made whole.

We have embarked on further developing our story-telling culture. Stories take the abstract of poverty alleviation, community development and spiritual and physical poverty and make them tangible. How do actions speak? Through stories that result from those actions.

This 15-year annual update focus primarily on stories. We only have room for a few, but there are hundreds more we could tell, and countless others we haven’t yet discovered.

Why do we engage in all of these projects, spending thousands of dollars to send people from here? People frequently ask, “Wouldn’t it be better if we just sent the money and not go to visit?” The answer is an unequivocal “No!” and here is why we do it.

Something happens deep in our spiritual lives when we demonstrate care, compassion and kindness, which is then reciprocated and becomes a friendship.

Something transformational happens when we “spend ourselves” and people living in extreme poverty realize they are not alone. We feed, build, go, plan and fund activities, but God transforms our lives and their lives in the process.

That’s the point. Changing other people’s lives will change your life and the spiritual results to all of this are eternal.

Bright, beautiful — a modern mom. This is Maureen. She lives with her husband, Edwin, and their four children, ranging in age from teenager to brand-new baby.

Their home is the Nyalenda area of Kisumu in Western Kenya. Nyalenda is considered a slum. There is a road that creates the division between the rest of this city of nearly one million residents from Nyalenda. It is the city’s largest slum, and is characterized by overcrowding, unsafe water, open waste trenches, and the drug and alcohol problems that plague slum areas such as this. This is not an easy place to raise a family.

Married in 1998, the family was desperately poor. Lack of employment opportunities for her husband and no family inheritance left few options. When her first child arrived in 1999, the weight of their situation only deepened. One afternoon, in 2000, there was a knock on the door. It was a pastor. He shared with Maureen and her husband the story of Jesus’ love for them. He encouraged them to put their hope in God. Maureen believed and, together with her husband, began to pray.

For years they held firm to their faith, enduring every kind of hardship — believing that God would answer their prayers. Then, in 2013, Maureen’s eldest son, Nigel, was severely injured at school. At the same time, her brother died suddenly.

While attending to her brother’s burial in a neighboring town, she learned that Nigel’s condition had worsened. He lay at the edge of death, and the situation seemed hopeless. There was no ability to pay for the treatments needed to save his life. It was at this moment that God began to answer their many prayers. An unexpected circumstance led them to a member of a team from Canada. The team rallied around them and provided the needed immediate and ongoing care for their son, and a relationship was formed.

Fueled by their faith, answered prayer, and an entrepreneurial spirit, Maureen and her husband began to dream of converting the front of their tiny home into a small store. With the loan of $1000 in 2015 from another visiting team, they made their dream a reality

Today, the relatively small investment has already given them the ability to feed their family three meals a day, after many years of bare survival. The health of the family has improved drastically, and she is dreaming about expanding their stock in order to increase their income, and thereby provide for more of their children’s educational needs. Maureen is the face of this tiny store. Her energy and spirit are the catalyst for this successful endeavor. This Kenyan mom is a business woman — strong and bold — full of ideas and energy. A woman of deep faith and experience.

Maureen is standing tall in the Nyalenda Slum...an example of God’s presence and power. She has a story of God’s faithfulness. She is strong...brave...inspiring. The relatively small investment of $1000 has transformed her family. They are growing, eating, and going to school. It seems that a small investment in the hands of a brave Kenyan woman can change the world.

A pair of boots

Organizations develop legacy stories. These are the few stories that perfectly embody the vision and mission; the stories everyone remembers and that wake us up in the morning, propelling us into another day. Victoria’s story, or the “Boots Story” as we know it at HFL, is one of our first legacy stories from 15 years ago:

This is the story of a family living in Ukraine — a single mother and her three children. The mother was dying of cancer and the family was extremely poor, relying totally on help from people in the area. On December 25th, she passed away, leaving her children alone to be placed in separate orphanages. Nadya, a Christian social worker who had been caring for the family, went to the officials and fought so that the children could temporarily live with their aunt until the funding was available to provide them with an apartment.

The children had barely enough food and clothing to survive. One of the children, Victoria, really wanted a pair of winter boots, because the winter season was fast approaching.

The social worker told her she should pray and ask God to send her this gift.

The children had barely enough food and clothing to survive. One of the children, Victoria, really wanted a pair of winter boots, because the winter season was fast approaching. The social worker told her she should pray and ask God to send her this gift. So, Victoria began to pray every day for boots. The social worker was quite concerned with what she had suggested, because Victoria had so much confidence that it wasn’t a matter of ‘if’ but ‘when.’

In Canada, Mary had an opportunity to collect clothing from people around Vancouver to ship overseas to the poorest areas of Ukraine. She was able to collect ten parcels of clothing, which were shipped months before Natasha’s passing. When they finally arrived in Eastern Ukraine, inside there was one pair of winter boots.

The very next day, Nadya took the boots to see if they would fit the girl and, when she tried them on, they fit perfectly.

The children’s aunt had been listening to Victoria’s prayers. She was cynical, but when she saw the gift that Victoria had been praying for, she was surprised that people in Canada would consider sending things to them. God’s provision through these people caused her to start attending church and to find out about Jesus. And, she even overcame her addiction to alcohol and became a born-again Christian.

Three years ago, Victoria met a Christian man and, as their relationship developed, they discovered they both had a passion to reach orphaned and vulnerable children.

Today, they are married and live in Kazakhstan with their two year old daughter. Shortly after settling in, they started an after-school program for children. They bathe and feed the children and, most importantly, provide a safe, caring environment from the severity of life.

Victoria and her new family are living out the kind of love they experienced. Not only did kindness and a pair of boots change her life, but now that act of compassion has produced fruit in the lives of other children. We generally have no idea how God uses small acts of kindness in people’s lives. However, in Victoria’s case, we do. It is pretty awesome to wonder what else God has done with small, passing acts of kindness and generosity.

Hear Angela's thoughts on HFL and being a staff member since 2003.